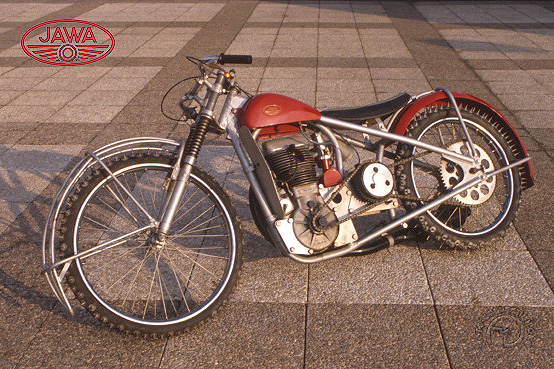 Ice racing - like the related sports of speedway, grass-, dirt- or sand-track racing - is a speciality of northern and eastern Europe. A handful of specialists like Weslake, Godden and GM build perhaps a few hundred bikes annually for these specialized sports. The Czech Jawa factory is one of the major suppliers of ice-, grass- and dirt-racing bikes.

For Jawa these machines are an inheritance from the Eso firm) taken over in 1964, that enjoyed a virtual monopoly in these spectacular disciplines, which are all run on oval tracks. If their cycle parts look primitive, it's because they have been shaped by the needs of these closely-related sports: elementary frames, no brakes, minimal suspension, virtually direct drive and a seemingly basic engine. In reality, these power units are more highly developed than it would seem at first glance.

For a long time, an overhead camshaft and four valves have been the standard, except for ice racing, where the rules forbid the use of more than two valves. This limitation has

maintained Jawa's monopoly in this field, the sole change being a switch from overhead valves to an overhead camshaft in 1986. The most striking aspect of this specialized spott is the use of massive studs in the tires mnning under heavy shields, which bite deep into the ice, allowing the bikes toÂ· assume the most fantastic angles.