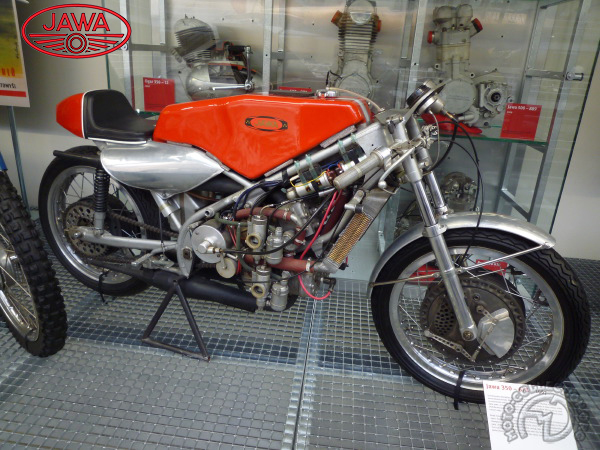 The Prague Spring accelerated the opening of Czechoslovakia to the west; competition was rife between the sister factories of Jawa and CZ, and each firm launched its own 350cc four-cylinder Grand Prix racer for 1969. The CZ was a four-stroke, the Jawa a twostroke. Neither machine was ready at the start of the season, but the Jawa saw action two months before the CZ.

Making its debut at the second Grand Prix of the season, on the rapid Hockenheim circuit, the Jawa square-four was an instant sensation in the hands of Bill Ivy, who had been 125 world champion in 1967 and "moral" 250 champion in 1968. The Jawa placed second behind the MV of the unbeatable Agostini, already four times world champion. "Ago" and Ivy led all the other riders by at least one lap; Frantisek Stastny finished third on the other ]awa. No one else came within striking distance of the MV-Agusta.

Ivy was second at Assen, too, but the reliability of the V4 was erratic, and in practice at the East German Sachsenring on July 12th, the Jawa seized and "Little Bill" was killed in the ensuing crash. Grassetti, signed to replace Ivy, had some good results: third at Brno, second at Imola, first at Opatija, but Jawa decided to withdraw the V4 at the start of the 1970s. Three examples of this machine designed by Zdenek Tichy were built. The marque retumed to GP racing with a 250 twin in 1977.

The 350 ]awa square-four was fast but erratic; a tragic seizure cost the life of "Little Bill" Ivy, one of the outstanding riders of the 1960s.