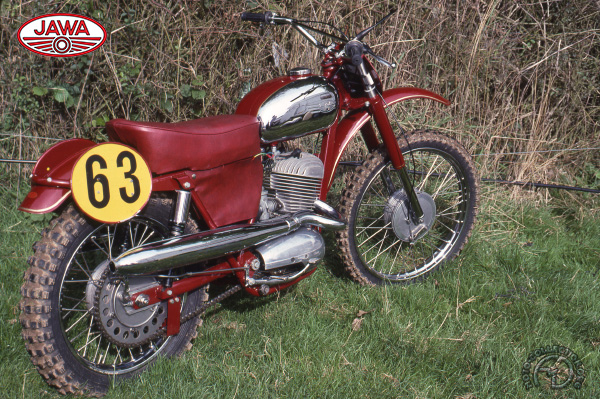 In 1957, Cizek's jawa 250 motocross bike placed third in the European lightweight cup. The Jawa 250 was also making its mark in export markets like France, where the newly instituted 250cc Motocross Championship seemed tailor-made for it. That same year, Czechoslovakia finished second behind Germany in the International Six Days' Trial.

Jawa's enduro and motocross machines were nearly identical. It won the constructor's team prize and Silver Cup with the 250cc bikes of Sacha Klimt and Soucek Miloslav and Sedina Vladimir's 750. Nevertheless, these Jawa motocross and enduro bikes, which were proving the superiority of two-strokes, were closely based on production models.

The moderately long stroke (65x75mm) 250 developed 17.5 hp at the relatively low speed of 5000 rpm, against 12 hp for the touring version. The four-speed gearbox had an automatic clutch controlled by pressure on the selector pedal, a long-time distinctive feature of Jawa. The 250 motocross had twinspark magneto ignition, while the ISDT version had a dynamo, twin coils and two spark plugs. The roadster model had classic coil-and-battery ignition with a single plug. The square-tube frame was very similar on the Six Days' and motocross models. Jawa experimented with a twin-cam four-stroke motocross bike that developed 24 hp, but nevertheless, it was a two-stroke that, in 1963, heralded the new guard with an astounding "banana" frame and a 250cc engine that developed 27 hp.

The Jawa 350 ISDT model marked the beginning of a new era in off-road competition towards the end of the 1950s.