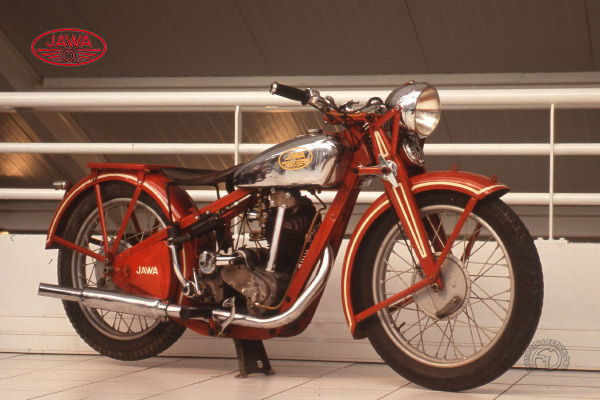 Czech with an English accent

As soon as British designer G.W. Patchett arrived at ]awa, he began working on an electric-start, shaft-driven, side-valve 350. It was intended to be a replacement for the

By 1933, however, the Depression showed no signs of lifting, and - in view of the success of his 175 - Patchett sensibly decided not to abandon a winning formula . He ended up basing his new 350 project on the model that had initially brought him success.

The 350, which appeared in 1934, omitted the costly refinements of the prototype. It got by with a total-loss oiling system. Only the semi-unit constructed gearbox and the up-to-the-minute cycle part revealed that this was, in spite of everything, an extremely desirable motorcycle. 2,500 examples were sold until 1936, and this modern motorcycle was backed up in 1935 by the overhead-valve version illustrated. Initially destined for competition work, it stood out by reason of its magnesium gearbox cover. As for the engine, only the cylinder and head differed from the original version. Reliability (notably on the lubrication front) proved a bit of a problem at the outset. As for the cycle part, the forks were slightly strengthened, but the

frame was barely modified overall. Despite the success of this second-generation 350 - only 2,700 units were sold unti11946. Patchett left the firm in 1938 to return to his native England. He gave up designing motorcycles and joined the armaments industry, which was no doubt more profitable at that time.

Reassured by the success of its 175 after the dismal experience of the 500, Jawa reappeared on the sports scene with this fine machine and its pressed steel frame.