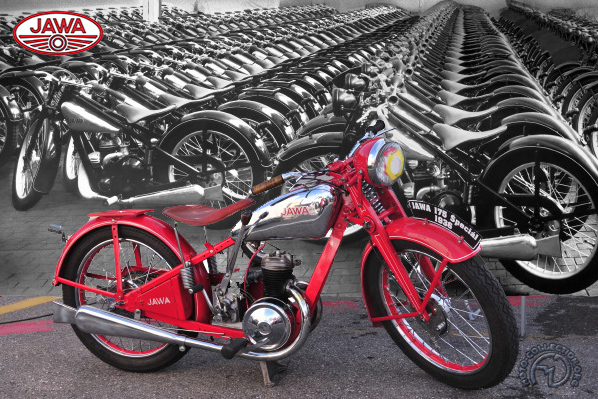 The start of something big

After the failure of its first 500, Jawa realized that its future lay in realistically designed motorcycles with modest capacities. During 1931, the British designer George W. Patchett was called in to create a rational range. While he was best known for his designs for Brough-Superior, McEvoy and FN, at Jawa Patchett demonstrated that he was also capable of designing more modest machines.

He had scarcely arrived when he designed an excellent Villiers 175cc two-stroke engine. It enjoyed great success from 1932 on. In fact, 3020 examples were built in the first year!

In 1933, the engine and most of the initially imported components - gearbox, hubs and brakes - were made in-house by Jawa, and for the first time, the income from the firm's motorcycle activities exceeded its arms sales. The 175 was less expensive than a third of its rivals. This handsome and reliable machine, endowed with good performance, really put Jawa on the map. It was built until 1946, in 17 successive versions, and 27,535 units rolled off the production lines. Incidentally, it was the first motorcycle in 1938 to be fitted with dual controls, used for riding instruction. Above all, the 175 let Czechoslovakia completely reverse the makeup of its market. In 1930, 94 percent of two-wheeler registrations were imported machines. In 1937, 94 percent of registrations were built in Czechoslovakia. Jawa built 30 ,000 machines and became the country's leading manufacturer.

The arrival of the British engineer G. W Patchett established ]awa as a major player on the motorcycle scene, with his little 175 becoming CzechoslovakiaÂ’s best-seller.