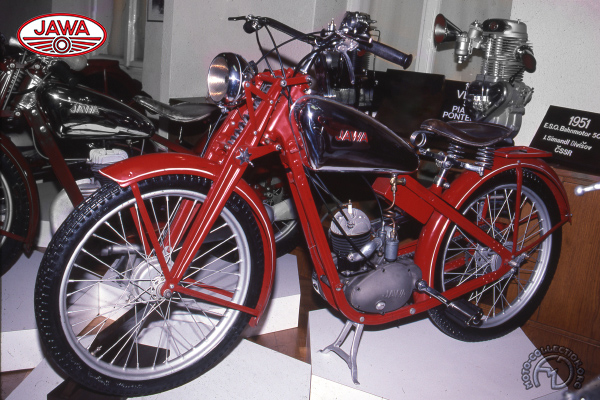 This popular copy of the DKW RT 100 was created in 1937 by the famous British engineer George William Patchett, who had been hired in 1930 by the founder of the Jawa works, Frantisek Janecek. Having begun making arms, Janecek had diversified into motorcycles in 1929 by acquiring the license to build the Wanderer 500 shaft-driven single plus all the manufacturing tools. But the Wanderer was big, heavy - and unsuccessful.

Patchett launched a light, economical bike as soon as he arrived at Jawa, to ensure that the works was operating at a profit. This was the Villiers-powered Jawa 175cc, which sold very well and allowed Jawa to begin production of a bigger four-stroke, a side-valve 350, quickly followed by an overhead-valve version.

Jawa also took part in competition, especially in the sand-track races on hard dirt circuits that were popular in Czechoslovakia, where the Jawa 350 riders F. Juhan and the German G.H. Gunzenhauser were particularly successful. In 1936, Jawa replaced its 175's Villiers engine with an own-make power unit, a modern 250 two-stroke inspired by the best-seller in the class- the 250 DKW. It had a Schnurle loopscavenging system, which developed 9 hp. The next step in the enlargement of the range, still in DKW's image, was this very popular 100cc Robot fitted with pedals, though in practice these were hardly necessary since it only weighed 108 lb and its 2.7 hp engine driving through a three-speed transmission gave it a top speed of just over 40 mph.

Tbe Robot was a highly popular machine that thepost-1938 political situation prevented from beingexported in any quantity.