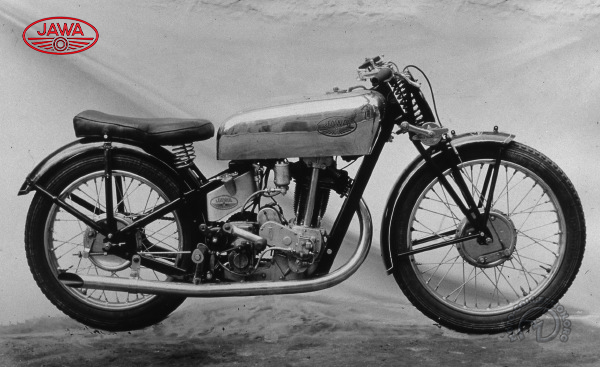 Czech bike with an English accent

Many engineers who had learned their trade during the growth of the British motorcycle industry in the early 1900s left England to work abroad between the wars. Among them were Walter Moore, who in 1929 left Norton to take over as technical director of NSU in Germany, Dougal Marchant, who made use of his experience with Motosacoche in Switzerland, and George Patchett, who left Brough Superior to join the Belgian FN marque before moving to Jawa of Czechoslovakia in 1930.

Birth of a Marque

It was around that time that Jawa was beginning to build motorcycles. The firm had been founded in 1929 by the Prague arms manufacturer Frantisek Janecek, who wanted to diversify his activities by moving from armaments to the manufacture of vehicles.

His first experience in two-wheelers came with the production under license of the German Wanderer motorcycle, hence the name of 'Jawa," a combination of the ftrst two letters of the words 'Janecek" and "Wanderer." The dual task that faced Patchett was to create a new range of Jawa machines to replace the old, ugly Wanderers and to build some racing bikes capable of winning events. The first Patchett-Jawa racers were 500cc singles with a big unit construction engine mounted in a pressed-steel frame. They raced between 1931 and 1933 and were then replaced by lighter bikes of a more British appearance, with separate gearboxes. Produced in 350 and 500cc versions, they were

quick enough to win local races but failed to shine at the international level.

The 1935 jawa works racer designed by British engineer George Patchett, was a state-of-the-art design that enjoyed some national success.