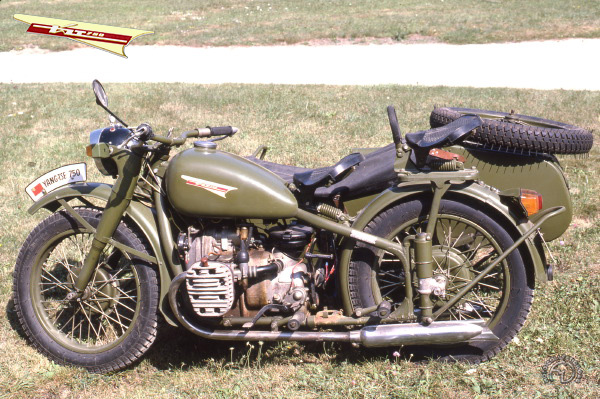 Well behind the times

In 1938, BMW launched the 750 R71, a logical development of the 1936 R12 and the last sidevalve BMW. Some 3500 examples were built by 1941, but the aura of German wartime bikes was so powetful in totalitarian states that the R71 would have the most formidable offspring - millions of Russian and Chinese copies.

Initiative was hardly regarded as a virtue in the former Soviet Union, and even less so in China, so these descendants of the ancient BMW have remained very close to the original.

The unit-constructed engine of the Yang-Tse was a slavish copy of the 1938 BMW R71, while the gearbox was equipped with direct-drive dog-clutches and a forked selector copied from the Russians. The electrics were amazing - neither the Russians nor the Chinese had developed miniaturized coils, so external coils were fitted. The sheer bulk of the Chinese electronic regulator, reserved for this "luxury" version, was mind-boggling. The plug leads were insulated with varnished cotton, but - indefensibly- the 750 Luxe was the sole copy of the BMW that had a positive ground for the battery. It's difficult to imagine just how far behind China was industrially - the cylinder

heads had not even had the foundry flash removed. Lacking tooling, all the paneling was

formed with a hammer. The frame seemed to use BMW's famous oval German tubes, but these are just round tubes flattened into shape. There was a very obvious weld on the rims (it sometimes splits) and the wooden seatback on the sidecar was "recycled" from packing crates.

The Yang-Tse is astoundingly like the 1938 BMW; its sidecar is even interchangeable with the original German BMW type 286.