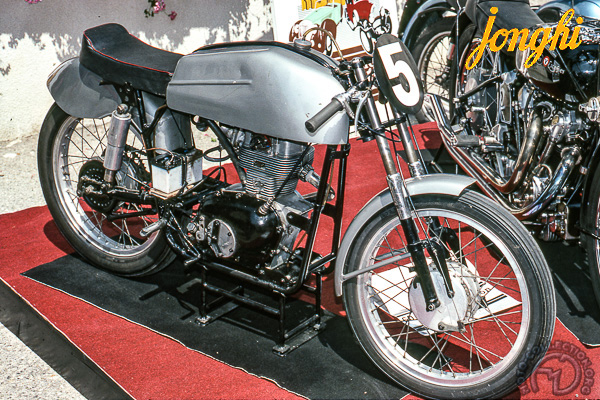 When the Paris Salon of 1948 was drawing to a close, it found room for a dramatic 11thhour exhibit, a 125cc racer that had just broken Ā– in three sessions at the Montlhéry autodrome on October 4, 10 and 15 Ā– no fewer than eight world's records.

The motorbike in question was an overhead-camshaft 125cc Jonghi, built at La Courneuve (Seine) by Guiseppe Remondini, an engineer who had moved to France from his native Italy at the start of the 1930s. The rider for the record session had been his son Arrigo, who had actually broken the last two records (100 km at an average of 76.10 mph and one hour at 76.34 mph) on his wedding day. The weather forecast being favorable, young Arrigo had hastily cut short the wedding and rushed out to the banked track at Montlhéry!

It had all begun in the spring of 1947 when the marque Ā– recently taken over by SATAM, a maker of gas pumps Ā– unveiled a remarkable 125cc engine, a compact high-performance unit. By the next Salon, it had been fitted into a fully sprung frame with ignition by flywheel magneto and battery Ā– the record-breaker had a conventional magneto. All this engine required to unleash its potential was a set of sport or racing cams. It was one of the few machines that could compete equally with the Italian racers. Many French riders made their mark racing a Jonghi, including Jean-Pierre Beltoise. The marque specialist was a racer named Michel, who, backed by the tuner FranĆ§ois, in 1953 lapped Montlhéry at 83 mph.

The Jonghi engine was highly competitive, but Jean-Pierre Beltoise adapted this machine to take new front and rear suspension units.