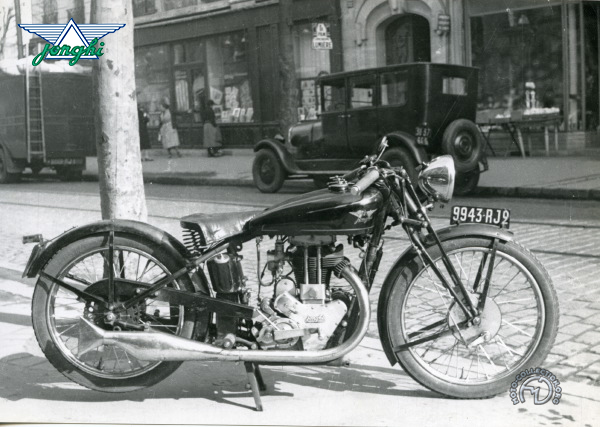 Simplicity beats out the complex

Jonghi was a small French marque founded in 1930 by the financier Tito Jonghi and the engineer Giuseppi Remondini, refugee from the competition department of Alfa Romeo and former technical director of two Italian motorcycle companies, Frera and Negas & Ray. The first Jonghis were simply renamed Negas & Ray 350s.

Despite its small beginnings, the Jonghi marque soon made a sporting name for itself: Jonghis, ridden by such experts as Louis Jeannin, Georges Monneret and the Remondini brothers, won the 1932 Rome Grand Prix and Bol d'Or and took a 24-hour world record at an average of more than 72 mph in 1933.

No Secrets, No New Technology

But there was no technological revolution behind the success of the TJ 4; its engine was a classic 350cc four-stroke with either an L-head (65 mph) or overhead valves (84 mph), mounted in a double cradle tubular frame devoid of rear suspension. Its superiority on the track lay entirely in careful preparation. That's often the way in racing, where technical innovation can play second fiddle to meticulous preparation. Jonghi went out of business in 1956, after building some 800 bikes, including a 125cc four-stroke as beautifully made as its 350, a two-stroke cyclemotor and a scooter.

Classical in its simplicity, the Jonghi TJ 4 was one of the most handsome French racing bikes of the Thirties.