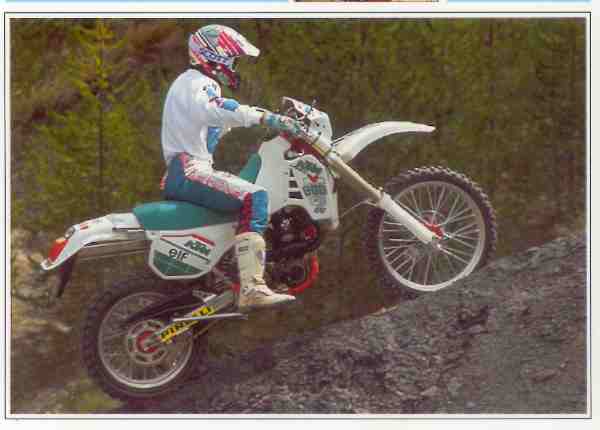 Outclassed in off-road competition by the lighter and more powerful two-stroke, the four-stroke engine began to reassert itself in certain specialized disciplines in the mid- 1980s, thanks to sophisticated technology.

Response to the Husky

Launched in 1986, the Husqvarna 510 revolutionized the world of motocross and enduro racing. This compact, light and extremely powerful four-stroke used the bottom end of a two-stroke engine and revved freely. The Husky's bitter rival, the Austrian two-stroke specialist KTM, responded in 1988 with its own in-house four-stroke, the 600 LC4.

KTM started work on this engine as a replacement for the outdated and overweight Rotax two-stroke. Engineer Josef Hattinger responded to the very precise design parameters Ā– compactness, lightness, performance and individuality. It had a handsome oversquare four-valve four-stroke single with a single-overhead-camshaft, liquid cooling, lightweight (4.4 lb) bottom-end assembly, short connecting rod, minimal inertia, and freedom from high-frequency vibrations. It had a lot of high technology for an engine that weighed under 80 lb. It developed a genuine 47 hp at 7500 rpm. The debut of this splendid engine was marred by tricky starting and a tendency to seize. The works soon rectified these teething troubles. Fitted in a frame incorporating all KTM's know-how, the 600 LC4 delighted fans of sporting four-strokes in the early 1990s.

Light, compact and powerful, today's competition four-strokes have little in common with previous generations of off-roaders.