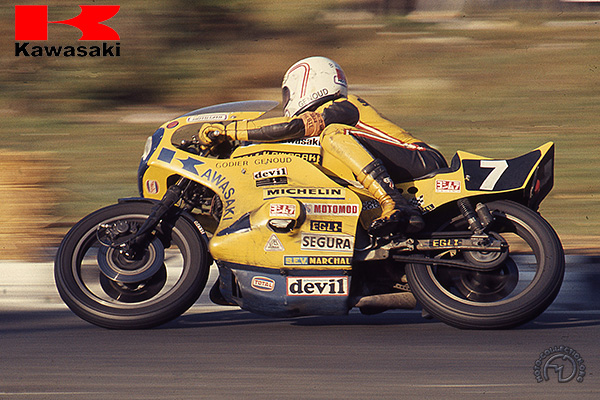 Tale of the Bol d'Or

Inaugurated in 1922, The Bol d'Or 24-hour endurance race was one of the major French competitions of the pre-war era. Halted in 1939, resumed in 1947, the Bol d'Or was once again killed off in 1960; it rose from the ashes in 1969 with spectacular popularity, attracting an estimated 100,000 spectators.

That first race of the new series was won by Michel Rougerie on a Honda. In 1970, a Triumph came first and in 1971, a virtually identical BSA won. A Honda-Japauto was victorious in 1972 and 1973, then in 1974 it was at last the turn of Kawasaki, with a well deserved victory for the Franco-Swiss team of Georges Godier and Alain Genoud, who had already enjoyed a fine win in that year's Barcelona 24-Hours race. The same riders repeated their exploit in 1975 and these successive victories inspired Kawasaki to make a long-term commitment to the world endurance championship, which won again in 1991, along with the Bol d'Or.

The Bol d'Or really came of age in 1974, when the competing bikes were prepared specifically for endurance racing, with aviation-type high-speed fuel fillers and fittings designed for rapid maintenance. This Kawasaki, derived from the 900 Z1, was fitted with a conversion kit which increased its swept volume to 999 cc and a special frame made by the famous Swiss builder Egli.

Godier and Genoud won a stunning victory in the 1974 Bol d'Or on this Kawasaki.