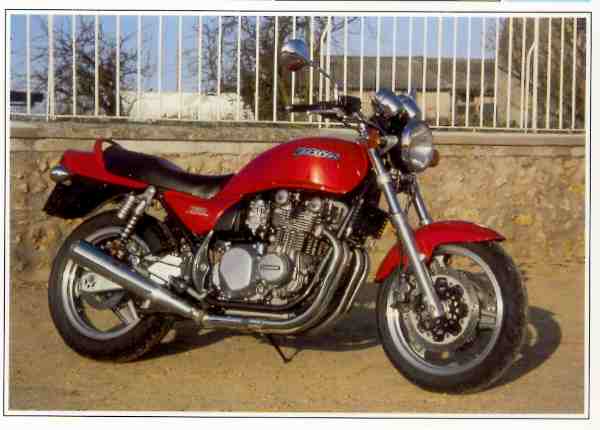 In 1972, Kawasaki's 900 Z1 was the undisputed queen of the big super sport fourstrokes. Super sports bikes have become real competition machines in road-going form, very sophisticated, very expensive, and so fast that it's difficult - and legally impossible -to make full use of their performance.

Affected like every other manufacturer by the downturn in the market for these "hypersport" bikes, Kawasaki reacted by retracing its steps, launching in 1990 a replica of its renowned Z1 900 and Z2 750. It was a wise choice, for the replica permitted Kawasaki to revisit less demanding technical solutions. Thus its twinoverhead- camshaft four-cylinder engine Ā– a modern version of the Z650 of 1976 Ā– was air- rather than liquid-cooled. The rear suspension by cranks and single damper unit, commonplace on modern sports bikes, was dropped in favor of a single swinging arm with two spring/damper units. Moreover, the Zephyr had no fairing. While it was luxuriously detailed, the Zephyr was nevertheless built down to a price and its highly flexible engine and low saddle height made it easy and pleasant to ride.

It was a successful gamble. The Zephyr, offered at a ve1y competitive price, won over Japan just as it had done Europe and enjoyed great success, to the point that, in 1992 Kawasaki followed its Zephyr 400 (for Japan) and 750 (for Europe) with an 1100cc model: the start, perhaps, of another infernal round of performance upgrades.

The Zephyr was tbe first of a new type of superbike known .familiarly as "basics."