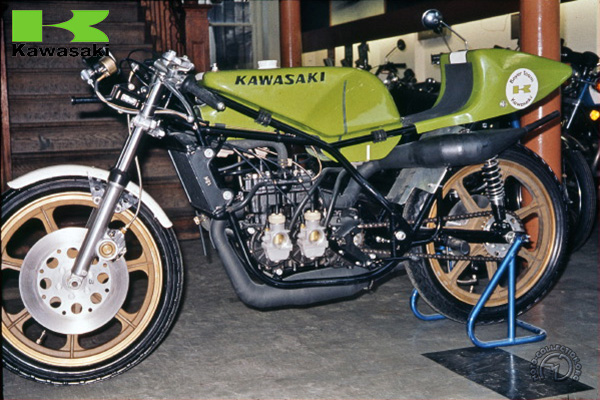 In the 1970s, the Canadian champion and Kawasaki works rider Yvon Duhamel enjoyed considerable popularity in France. His favorite events were the 200-mile races run under the FIM formula, but in 1975, Duhamel announced his participation in Grand Prix with two entirely new machines: a three-cylinder 500 with liquid cooling and this intriguing 250.

This miniscule 250, scarcely bigger than a 125, pioneered an engine configuration that would later make the fortune of the Austrian Rotax engine firm: the two hard-chromed aluminum cylinders were laid out in tandem with two counter-rotating crankshafts linked by straight-cut gearing. This exceptionally narrow engine had two rotary intake valves fed by big 32mm carburetors mounted on the left-hand. side of the motorcycle.

The gearbox incorporated six speeds, as laid down in Grand Prix regulations, but the addition of a seventh speed was planned for races in the United States where it was permitted; a dry clutch was used. A scaleddown replica of the 750, the frame was made

up of upper and lower double cradles surrounding the engine. With 55 hp and weighing under 220 lb, the Kawasaki should have been competitive: but it was no match for the Harley-Davidsons and Yamahas.

Transmission: 6-speed (7 for the USA)

Apart from the compulsary 20 inch bancllebars, the widest part of 250 GP was its engine, 11.8 inches across.