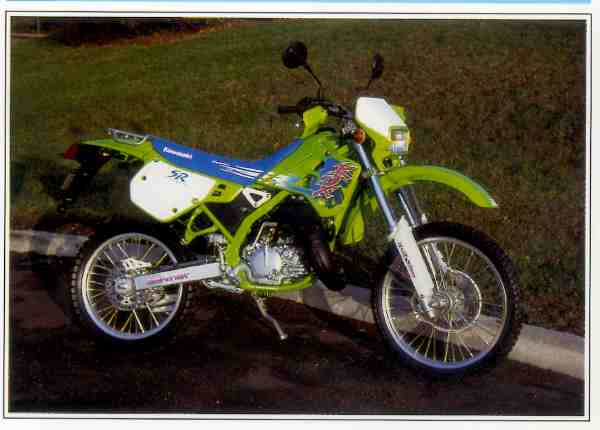 Aimed principally at the youth market, the 25 trail bikes fully mimic motocross machines: the Kawasaki KDX 125 is typical of the breed.

If you remove the headlamp, rearview mirrors, the turn signals, the license plate and other legal requirements, you could easily confuse the KDX trail bike with a KX motocross machine! The resemblance is so striking that it goes far deeper than a simple trick of styling, for there has certainly been a transfer of technology.

The Features of a Motocross Machine

That's why you find the same perimeter frame with its characteristically robust side members and removable rear end, the inverted fork, the rear damper with separate adjustable hydraulic pressure cylinder, the "low boy" muffler, the intake in the crankcase and the KIPS valve on the exhaust to maximize the engine efficiency and the two disk brakes. The KDX is otherwise perfectly "civilized," with separate lubrication, water temperature gauge, parcel carrier, hand protectors, anti-theft device on the ignition and all the rest! Succeeding the KMX, which for some years has had the best engine in its category, the KDX revives the nomenclature of the marque's enduro machines. The idealization of the trail bike, the KDX is a replica of a motocross bike with a stupefying overlay of high-tech features. It's a shame that the 125 category, thrown off balance by hostile legislation, is in full decline.

This splendid little trail bike is a serious beginner's off-roader; which is just as capable of taking its rider to school.