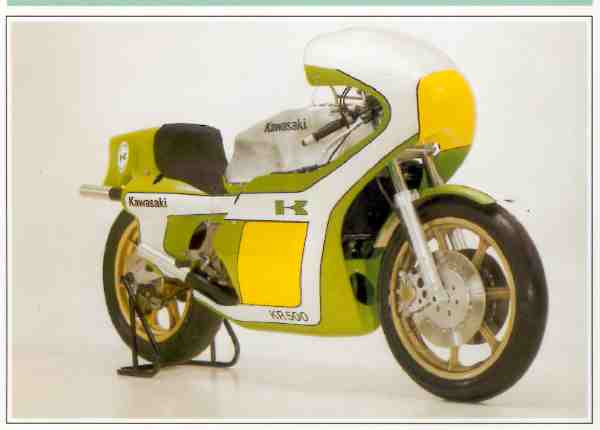 When Kawasaki announced its entry into 500cc GP racing in 1979, observers of the Grand Prix scene were enthusiastic. The results obtained since 1977 in the 250 and 350cc classes spoke for themselves - between 1978-82 their bikes would take eight world titles, plus a further eight for their riders Ballington and Mang. Great things were expected of the japanese company, for its racing team was talented and inventive.

Enthusiasts were overjoyed when they first saw the Kawasaki 500 GP bike. Though its engine was conventional, the frame was an aluminum box-girder; it had lever-arm rear suspension and the design of the fairing was very original. The marque's typically daring nonconformism boosted the popularity of the untried team; its efforts had alwayspleased the public and often inspired its rivals Ā– the in-line twin-cylinder engine of the 250/ 350 bore witness to this.

Sadly, the factoty didn't put enough effort behind the venture. A single rider, Kirk Ballington, was responsible for developing the machine, whose maintenance was very tricky. The ultimate versions were even more daring technically (anti-plunge suspension, 16 inch front wheel). He didn't even manage to win a single GP against massive opposition from Suzuki and Yamaha. Despite two encouraging victories in 1981, Kawasaki retired from racing at the end of the 1982 season without having demonstrated the soundness of the concept.

As innovative as many Kawasaki designs, the 500KR was not backed by sufficient investment to stand a chance against tbe Suzuki and Yamaha bikes of its day.