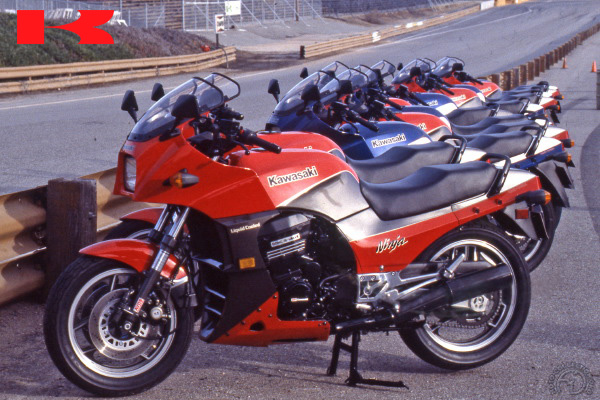 The motorcycle shows of Fall '83 marked a further step along the road of ever-increasing power outputs. Conscious of the inroads they had made already, the Japanese manufacturers decided to tone down their efforts. Kawasaki decided to advance undercover and to counter the 1000 and 11OOcc machines of its rivals by launching a 900. Nevertheless, its engine marked an important technical turning point.

The Ninja proved to be innovative in many respects. Rather than raw power, Kawasaki had sought compact design, with a remarkably narrow engine, with its camshafts driven direct from the end of the crankshaft. It was also remarkably low-built: the frame was reduced to a strong backbone with a bolted-on tubular aluminum rear section and the engine suspended underneath. The machine's aerodynamics benefited from its low profile.

The Ninja was not the most powerful of the new machines of its day. On the other hand, that clearly revealed its sporting nature. Its discomfort on the road was only rivaled by its ability on the track. Very fast, yet reasonably priced, the Ninja was a surefire success, so much so that Kawasaki was forced to resume production after having halted it! While its frame design was an evolutionary dead encl., the Ninja's new-generation engine appeared in several subsequent Kawasaki models.

KawasakiÂ’s big bangers have often played on their ''outlaw" image; the Ninja brilliantly sustained the legend in its day.