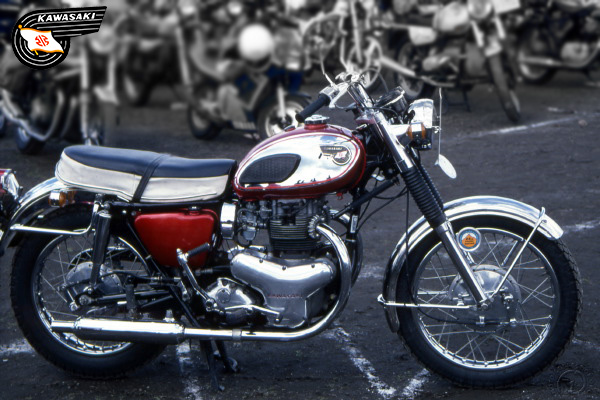 Japanese giant with an English accent

Up to the 1960s, Japan relied on copying the leading foreign marques. Kawasaki built its first motorcycle in 1951 and, ironically for a marque which became famous for its two-strokes, was the sole Japanese maker with serious four-stroke know-how. It had absorbed Meguro, which had specialized in this field since the 1930s. The first Kawasakis were simply rebadged Meguros with a very British 650 twin.

Meguro's first twin had been the 650 T1 of 1955, a sort of patchwork of various British designs of the period, though its engine dimensions of 72x80mm were less "long-stroke" than was normal in England. It developed 23.5 hp @ 5200 rpm, could reach over 80 mph, weighed 503 lb and was for a long time the biggest Japanese bike along with the Cabton 600 twin and Rikuo 750.

Original Kawasaki W1s are highly sought after; the current vogue for nostalgia has recently persuaded the company to issue a replica!