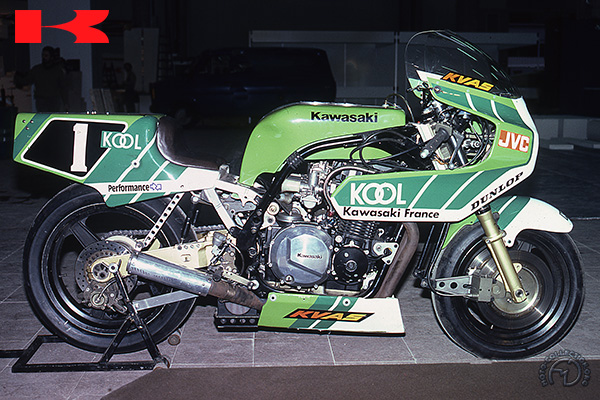 Unlike Honda, which built its first prototype endurance racers in 1975, and Suzuki, which went the same route in 1980, for a long time Kawasaki restricted its efforts in this field to the supply of power units and other components to private teams. Of these, the most consistent representative of the marque was the French Team Performance, whose record of success gave it privileged status.

Team Performance riders Roche and Lafond won the world endurance title in 1981 and Chemarin and Cornu repeated the feat the next year. The machine featured a steering head which allowed the angle of the front fork to be altered by simply inserting conical wedges. This practical device enabled the bike to be "tuned" to suit different circuits.

This machine also featured an anti-plunge linkage which used the movement of the brake callipers to minimize suspension bottoming. The engine, taken from the production 1000 J, had as standard a reinforced crankshaft which increases the power while retaining reliability. The four cylinder engine was bored out to 1150cc for the 1981 Bol d'Or 1981, which was run outside the championship series. Torque was increased, as was maximum power. In 1983, Performance took delivery of the first Kawasaki endurance racer developed in Japan; it was smaller, with an aluminum frame; weight was down by 44 lb.

Kawasaki and the French Team Performance worked together to produce these outstanding endurance racers, which did so much for both their corporate images.