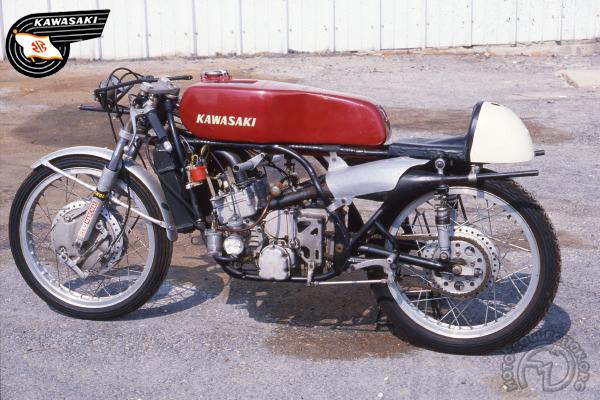 Unveiled during the 1965 Japanese Grand Prix were three examples of the KA-C. They were retired early, which was not unusual for a marque's first venture into Grand Prix racing. Duly improved, the KA-1 reappeared in the 1966 German Grand Prix, ridden by Toshio Fujii, who was killed soon after practicing for the Tourist Trophy. It was not until the last GP of the season, in Japan, that this twin returned to the track.

Ernst Degner fell during practice and works tester Ken Araoka, Dave Simmonds and Chris Vincent finished respectively 7th, 8th and 10th. The result encouraged Kawasaki to back Simmonds officially during 1967, but the year began with a series of breakages. Simmonds had no success until the Grand Prix of Finland; and then a bad fall put him out of action practically until the end of 1968. He received no works support during 1969, though he was allowed to keep the bike.

Yamaha and Suzuki withdrew from Grand Prix racing and Simmonds won the title by winning Grand Prix during the season, against a disorganized opposition and with a four-year-old mount Â– which he totalled in a fall at the end of the season! He was given a second bike, with which he placed fourth in the 1970 championship and won a final GP in 1971, but by now the Kawasaki was truly obsolete. It raced for the last time in 1973, ridden by Jean-Louis Guignabodet; Simmonds had died the year before when his trailer caught fire.

The 125 Kawasaki was a late bloomer: four years after its launch, it won a world championship title for Dave Simmonds, without any works backing.