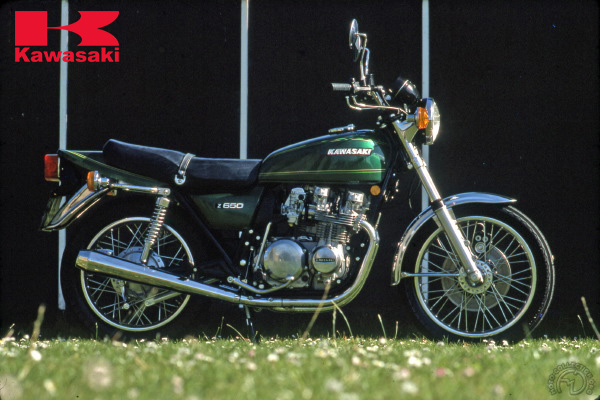 The first big four-stroke from Kawasaki

The smog regulations enacted in the United States in the 1970s produced some changes in the motorcycle industry. The three-cylinder two-stroke Kawasaki 500 and 750 paid the price and vanished from the market. On the other hand, the marque enlarged its four-stroke range with the excellent Z650. lt gave riders the definite impression that they had received the best of the bargain.

After the previous sensations launched by the marque in two-strokes, followed by the 1973 900 Z1 Ā– Kawasaki's handsome and original first venture into four-cylinder four-strokes Ā– one might have expected something a little more adventurous. But Kawasaki had decided to play safe this time.

The company did not want to jack up the price of this 650 with expensive equipment. So there was no rear disc brake, as on the recently introduced Z750 twin, nor were there alloy rims, and the finish was very understated. Big sales were expected for the Z650. It succeeded thanks to its sober appearance, its highly competitive price and its remarkable performance. It was one of the best bargains of its day and fell Ā– along with the Suzuki 750GS Ā– into an underpopulated market sector encompassing "medium-highĀ” displacement machines. Above all, it was perfectly balanced, easily handled and one of the fastest machines in the 650cc category. The only way in which it fell short of perfection was that it lacked bottom-end "grunt."

Without being in any way revolutionary, the Z650 offered a lot of performance for its price.