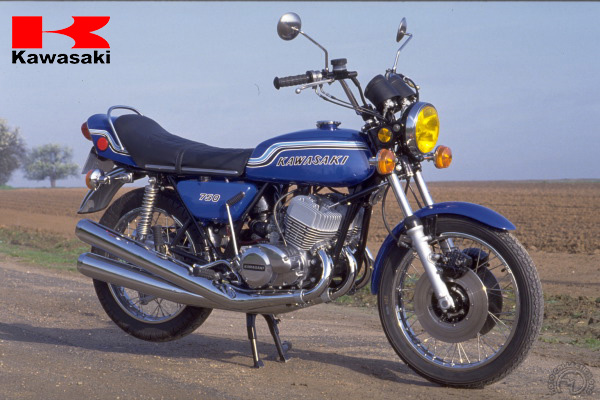 The most exciting machine of its day

When Kawasaki announced the 750 H2 at the beginning of 1972, motorcycling buffs anticipated a bigger, better and more potent version of the 500 Mach 1. They were both right and wrong at the same time.

The 500, launched three years earlier, was haunted by its image as an extremely powerful and responsive, but willful and violent, machine. Those who were fascinated by its extraordinary performance were horrified by the weaknesses of its cycle parts and its brutal manners. The H2 sought to keep the fascination of the 500 and eliminate the worst of its faults.

It borrowed the concept of three powerful two-stroke cylinders from its smaller sibling. Suspension and brakes benefited from the latest progress. Despite its imperfections, the 112 was altogether a tighter, improved machine. The frame largely succeeded in containing the problems caused by an engine that was bursting with superabundant midrange torque and violent when its rider applied the spurs in earnest. Nevertheless, its imperfections became apparent when pushed to the limit: dubious straight-line stability, stiff rear suspension, inadequate braking, a frame that was not as rigid as it could be. The big "Kwacker" called for a little agility, adequate experience and a bit of luck. It was the most exciting machine of its day and with the best performance, a fact proved by the 750's competition record.

The 750 H2 is a spectacular example of the last generation of the big sporting two-strokes.