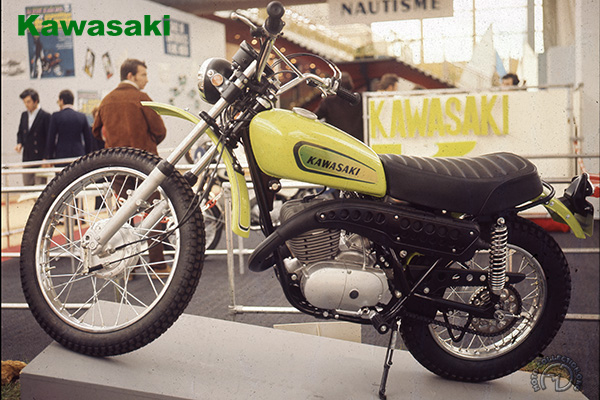 Kawasaki's first cautious step into the world of two-stroke, off-road singles was taken in 1968 with the launch of the 175 F3 and 250 F4. It was derived from the 250 F2IM motocross bike, which had made its debut the previous year. But it was not until 1970 that the full range Â– TR 125, 175, 250 and 350 Â– became available. Except for the rotary-disc intake valves, these machines were refreshingly original in design.

Not So Little Big Horn

The "Big Horn" engines of the 250 and 350 were completely new. While the engine of the first 250 F4 was dramatically oversquare at 70x62mm, its successor had identical (68x68mm) bore and stroke. The 350 was cheaply derived from it by boring the cylinder out to 80.4mm. These two models stayed in production until 1974, retaining their power outputs of 23.5 and 33 hp, only evolving their always striking color schemes plus a revised front end for the 250. In 1972 it acquired a conventional front fork and 21 inch wheel.

More for Track than Field

Intended more for track racing than for real off-road riding, the TR 250/350 had a catalogue dry weight of 271 lb, but that rose to 295 lb. Moreover, the 8 inch ground clearance was desperately inadequate. To overcome this handicap, Kawasaki adopted variable-geometric front forks whose tubes could be lowered by 2 inches. These featured adjustable spring tension and adjustable spindle mounts that gave a choice of three different caster angles.