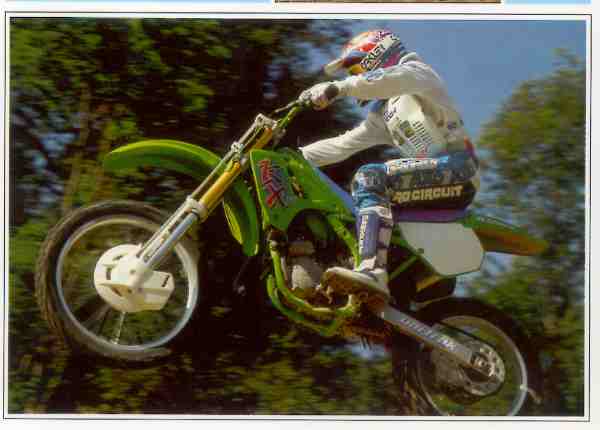 It's accepted practice in motocross for series-production models to automatically incorporate improvements tested in competition by the works riders the previous season. However, it is extremely rare to take part in a revolution as dramatic as that created by the 1990 KX 250.

The increasingly sophisticated suspensions absorb the ever more violent shocks of high-speed cross-country work. Motocross bikes must be more and more rigid in construction. The best means of attaining this goal is to link the pivot of the swing arm as directly as possible to the steering head. This is the solution offered by Kawasaki's perimeter frame.

With its upper double cradle composed of two strong sidemembers, it's basically an adaptation of the Deltabox frame used by supersports road bikes to motocross. With its triangulated upper part, this structure incorporates a removable rear section made of aluminum and supports, via strong plates, the upper mounting point of the damper. To match the character of this frame, the motor was also upgraded to become more than just powerful Ā– it was brutal! However, it's held perfectly in check by the rigidity of the frame and the suspension quality. It is an explosive machine, safe but tiring. However, its latest evolution models have tended to "calm" its fierce nature while improving its efficiency.

Ridden by Yannig Kervella, winner of the French Elite Championship, the KX 250 stands apart by virtue of its high-tech specifications.