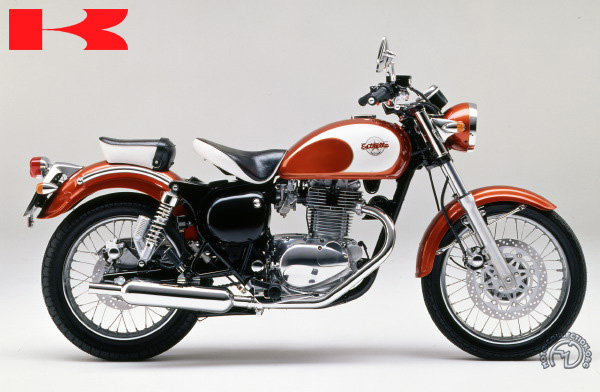 Forward to the past

The Japanese motorcycle market is one of the most confusing on the face of the Earth. In this island nation where some of the fiercest restrictions anywhere are placed on two-wheelers and the traffic is among the most congested, supersports bikes have long enjoyed success unparalleled in the West.

This nation, regarded as one of the most up-to-date and forward-looking, is also the one that, since the late 1980s, has developed the fashion for nostalgic styling. The Suzuki SW1 is the purest symbol of this trend, which has also given inspiration to the "no-frills" modern movement. The Estrella takes the concept a step further. However, it's not wearing false clothing, for in the 1950s, when Kawasakis were still called "Meguro," there was a 250 in the range that was as like the Estrella as two peas in a pod.

With two-tone paint job, plenty of chrome, rounded lines, separate saddles, ignition key under the tank, old-type muffler, Sixties-style lighting equipment and even BSA-style valve gear, no trick has been missed in recreating the Swinging Sixties. However, the disc brake and the rear dampers, with their separate hydraulic fluid reservoirs, do look rather out of place! A more down-to-earth advantage of the Estrella is its price, equivalent to around $3500, which is far more reasonable than that of the overly sophisticated SW1.

The Estrella plays the nostalgia card to the fullest, taking Kawasaki back 30 years in a single step to the days when these 250 singles still went under the name Meguro.