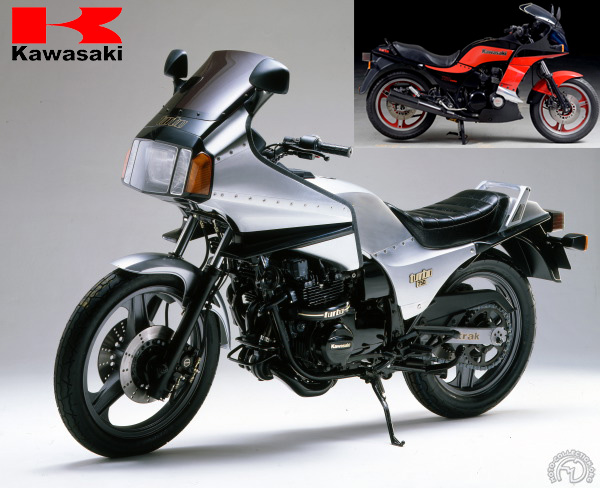 In 1981, turbochargers were all the rage: Honda and Yamaha had already launched turbo bikes, while Suzuki and Kawasaki responded to the challenge by launching turbo models at the Tokyo Motorcycle Show.

Based on the existing 750 model, Kawasaki's turbo bike had sensational styling, which foreshadowed the 1972 ZX range. The fairing, in satin-finished aluminum, was treated in an "aviation style that recalled the existing Kawasaki 500cc racer, with raised screw heads in the manner of aircraft rivets (another branch of the Kawasaki group was an aircraft manufacturer). The three-spoked wheels were also inspired by the 500cc GP racer, while this was the first road-going Kawasaki to adopt the Unitrak single shock-absorber rear suspension.

The instrument panel of the 750 Turbo incorporated a liquid crystal display, and the engine sported electronic fuel injection, a system that Kawasaki had pioneered in series production in 1980. Mounting the turbo ahead of the engine ensured that it was properly cooled, and the short exhaust tracts minimized dreaded turbo lag. But when the 750 Turbo went into production in 1983, while it kept the general appearance of the prototype, its gray color scheme had been sacrificed for a more aggressive red and black. Analog instruments replaced the liquid crystal displays.

Move over, Rover, and let turbo take over. Though the prototype Turbo 750 was styled like an aircraft fuselage, with exposed rivets, Kawasaki didn't dare put the aluminium fairing into mass-production.Â”