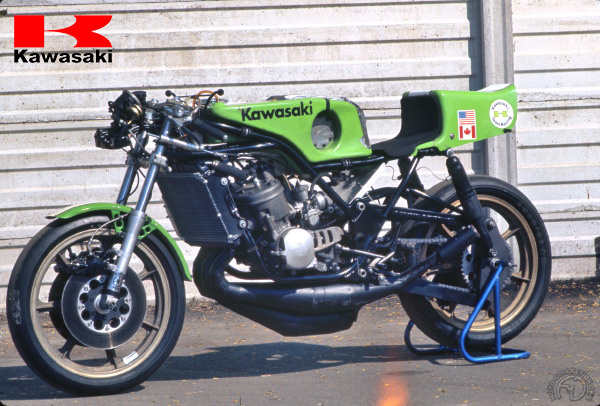 The best three-cylinder Kawasaki on the track.

Between 1973 and 1979 a kind of parallel world championship, the Formula FIM 750, was run in addition to the Grand Prix. There were nine races in the series, including the Daytona 200 in the United States and the 200 miles of Imola in Italy. Other events were held in Venezuela Europe.

The FIM formula proved remarkably successful, and the leading makers lost no time in developing special racing machines for it. On the other hand, leading drivers tend only to compete in major events like Daytona and Imola, restricting themselves to the 500cc world championship. This clash between the two championship series resulted in the 750 formula being suspended in 1979.

Kawasaki, with its enviable experience with big sporting two-strokes like its 500cc and 750cc three-cylinder machines launched in 1969 and 1971, seemed the best-equipped to cope with Formula FIM 750. But the marques results were not always convincing. Until 1974, the marque competed with the H2R, directly taken from the production 750, and it wasn't until 1975 that the first liquid- cooled Kawasaki - the KR 750Â— appeared. Totally redesigned, the engine was still breakable and, even worse, was considerably less powerful than Yamaha's OW31, which developed 140 hp! Nevertheless, the KR750 had its fair share of success.