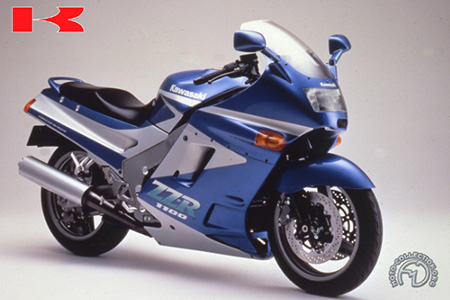 At the beginning of 1990, Kawasaki yet again set the arms race in motion with its ZZR 1100. Developing 150 hp in its unrestricted version, the ZZR is the most powerful series-production machine yet, though it hides its high-stepping nature under a sober exterior.

The ZZR is in the direct line of succession from the Tomcat, RX and Ninja which have, in their turn, represented the peak of the Kawasaki sports range. The ZZR inherited the famed inline four first seen in 900cc form on the 1984 Ninja. Increased 1000cc with the launch of the RX, this engine Â– still up-to-date Â– had gained another 100cc and further revisions had given more power and torque. It was installed in a frame that combined modern components and conventional geometry.

Once on the move, the Kawasaki shows surprisingly good manners: the feeling of weight is only apparent when at a standstill, the handling is excellent and the engine is remarkably good-natured when one is just tooling along. But an incautious twist of the wrist and the big Kwacker immediately unleashes its awesome power, laying a trail of smoking rubber for hundreds of yards and lifting its front wheel under the effect of the violent acceleration. A real-life dragster, capable of a genuine 174 mph, this Kawasaki impresses not only with its spectacular performance but as a fast and predictable grand touring bike.

The Kawasaki ZZR 1100 impresses finally as a rapid and comfortable grand tourer.