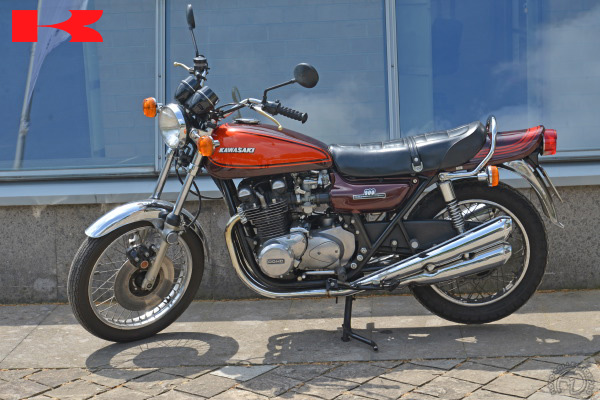 In 1969, Honda tempted fate with a formidable gamble: to reshape the world's taste in motorcycles with the introduction of a 750cc four-cylinder which stood established concepts on their heads. It was a near-fatal blow for most of the big manufacturers in Europe - and even in Japan, where only one of the other "Big Four" companies took up the challenge.

In fact. Kawasaki had given itself a head start,since it had had an advanced project for afour-cylinder super-bike known as the "NewYork Steak N 600" on the drawing boardsince 1966. When the Honda Four came out,Kawasaki wisely chose to postponerefinements on the project while waiting tosee if Honda's gamble was going to pay off.

All the prototypes developed by the American Kawasaki Motorcycle Corporation were named for meat or shellfish. Of these, the "New York Steak' was a double overhead- cam planned in 750 and 850cc forms, with a single-overhead camshaft. Redesigned as a dohc 900, it took the new codename "Zapper," from which came the famous "Z" which would later mark every Kawasaki. The order of the day at Kawasaki was "StudyĀ— and improve," and the Zapper was a success with this strategy. Its streamlined shape and excellent performance all outmatched Honda.