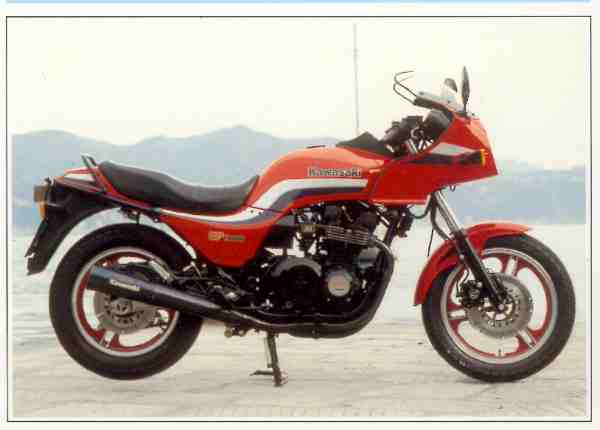 Technical revolution at the end of a long line

The ZX succeeded the GPZ in 1983. It was the last and most spectacular development of the old inline four, which had debuted 11 years earlier with the 900 Z1. It marked the beginning of a new era.

Compared with its predecessor, the GPZ, the ZX was noteworthy for its crisper, more aggressive lines, its steering head fairing and its Uni-Trak rear suspension, which signalled the disappearance of the lateral spring/dampers. The good old eight-valve four wasn't left out of the picture: its power output went up from 103 to 120 hp while keeping the electronic fuel injection already seen on its predecessor.

In the 1980s, before Honda had launched its CX Turbo and BMW its Series K, Kawasaki had brought out the limited-edition fuel-injected 1000 H and then adopted injection on its 1100 GPZ and ZX as well as on its six-cylinder Z1300. On the road, the power of the ZX engine was particularly impressive: From 6500 to 9500 rpm, it had more pulling power than the famous four. Despite its displacement and its power output, the ZX engine had a noticeable mid-range flat spot and was not particularly nice for low-speed work. As for its road-handling, the ZX was better suited to straight-line riding (where its stability was beyond reproach) than for mountain roads, where its sheer bulk was a brake on its efficiency. On the other hand, the Uni-Trak represented real progress in terms of comfort and handling.

The Kawasaki GP 1100 ZX marked the limits of development of superpowerful big bikes whose size and weight did not really square with handling.