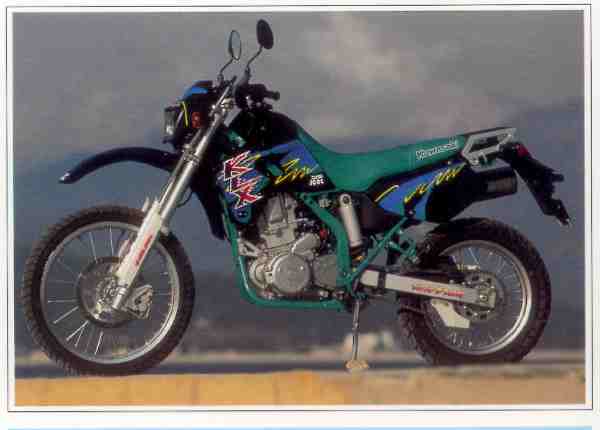 The last to arrive in 1993 in the already crowded niche of big single-cylinder trail bikes, the Kawasaki KLX went right back to the original concept of that category.

Lightest in the Class

A featherweight with a minimum of fairing, the lively KLX was the lightest in its class. For it, all-terrain use was far more than just part of the marque image that was missing. Alongside the "standard" KLX, Kawasaki offered the "R" version, a dedicated enduro mount developing 2 hp more and Ā– most importantly Ā– weighing 55 lb less.

Less of a roadster than the Honda Dominator or the Aprilia Pegaso, more lively and incisive than the Yamaha 660 Ténéré, the KLX represented an ideal compromise. Its lightness and flexibility were wonderful for enduro-style all-terrain riding, from fast roads to difficult trails conditions and urban usage. Efficient and very agile on minor roads, the KLX revealed on major highways that it only offered limited protection and its braking lacked "bite" for fast work. The KLX had all the qualities of a real trail bike, but all its drawbacks, too Ā– such as a slightly over-high saddle position and spartan comfort for the occasional passenger. On the technical front, the Kawasaki combined a fine selection of requisites Ā– a liquid-cooled engine with an internal balancing shaft and a cycle part incorporating the most modern techniques, such as perimeter frame with two upper tubes surrounding the engine, reversed fork and so on.

Elegant, sporty and effective, the KLX 650 has all the features that mean so much to enthusiasts for genuinely versatile trail bikes.