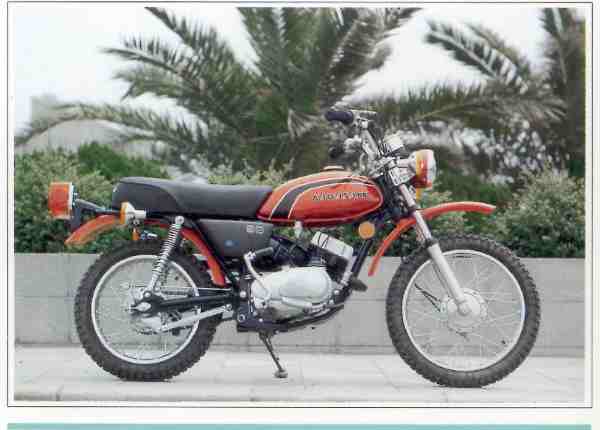 Fast and lots of fun

In the US, competition was fierce in the popular 90cc category between the various Japanese marques. Kawasaki was trailing behind the rest when it launched, in 1965 its 85 J 1, which only displaced 81.5cc (47x47 mm) but was available in four versions.

They were the Touring, Sport and Trail F (only differing in the tires fitted), which all developed 7.8 hp at 7000 rpm, and the motocross Model J 1 M, which was good for 11 hp.

These were fine performances for such little single-cylinder two-strokes, which Â– like the Bridgestone, Suzuki and Yamaha Â– had rotary intake valves. A genuine 90cc Kawasaki arrived in 1966, when the engine was bored out to 49mm. But in 1968, Kawasaki returned to the long-stroke configuration. In the wake of Yamaha's 1972 GT 80, Kawasaki entered the mini-bike market in 1273, with this TR 90. It was a perfect recipe for fun and produced lively little motorcycles that were extremely easy to handle. They had limited off-road capabilities, but in cities and on minor roads, these "mini trails" were unbeatable. Their sales in Europe were limited by their displacement, which fell lightweights, which offered greater performance at little extra cost. The TR 90 was renamed MS 90 in 1975, then KM 90 in 1977. It was joined by the KM 100, with an 8.5 hp engine, in 1979. Since 1976, the KE 90 had been available with larger wheels Â– 19 inches ar the front and 18 inches at the rear.

Lively, easy to handle and offering excellent performance for their size, the trails bikes such as the Kawasaki TR 90 were both amusing and effective little bikes.