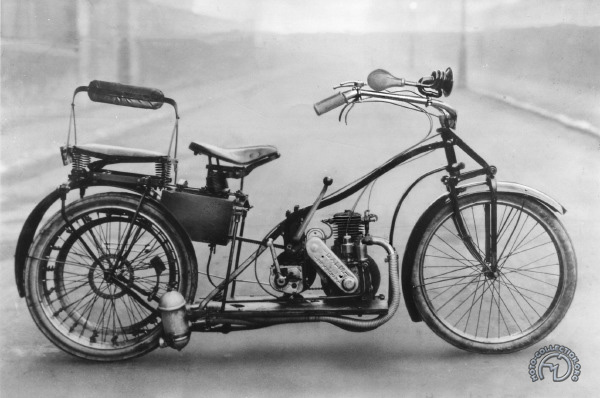 After WWI, there was a huge demand for personal transportation. After years of austerity and rationing, the masses - once again enjoying peace and prosperity - wanted the means to travel freely. For a few crazy years, the manufacturers were unable to satisfy the demand, allowing some opportunists to sell some very strange machines- and they didn't come any stranger than this 1921 Kelly!

Unlovely to Look At

Just looking at the Kelly makes one want to grin. It's such a random assortment of components that one wonders whether it was meant to be taken seriously- even in 1921.

The engine was a Dalm 320cc two-stroke - made in Birmingham and used by many manufacturers at the time - coupled to a two-speed Sturmey-Archer gearbox with final drive by belt, but the frame was a complete mess, seemingly put together with no guiding principle. The front suspension relied on an odd system of leaf springs, while the rear suspension was supposed to be taken care of by a pivoting-cradle frame. The company's publicity claimed that this layout "avoided side slips" and was "steady in traffic, needs no mechanical knowledge, will cross any doorstep ... has an open frame so that it can be used by Milord or Milady." Motor Cycle magazine's road-tester concluded: "The Kelly should be the object of a complete overhaul before any other examples are sold." For those days, that was strong criticism. It's hardly surprising that nothing further was heard of the Kelly.

No contest: Tbe 1921 Kelly was one of the ugliest bikes of all time, a real Rube Goldberg assembly of random components.