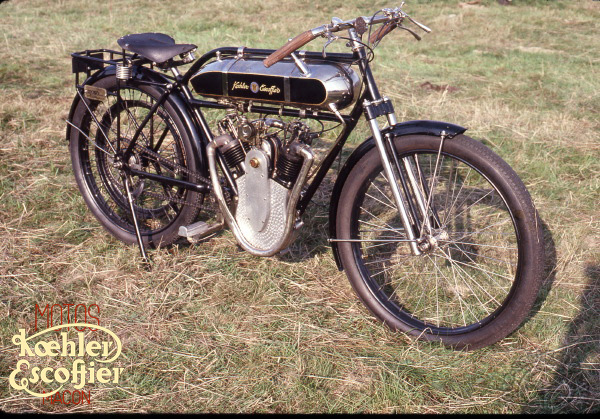 At the end of 1912, Jules Escoffier and Marcel KÂśhler began an all too brief partnership: the former passed away in 1914 and the latter failed to return from the war. Despite its tiny output, in less than two years the marque had become one of France's best-known firms, thanks to the sporting success of the Mandoline.

A Blend of Ideas and Money

At the start of 1912, Escoffier resigned from his job as a mechanic with Magnat-Debon to practice his skills in preparing Magnat-Debons for racing. He rapidly acquired an enviable reputation Â– and a rich backer, the amateur racer KÂśhler. To beat the single-cylinder Magnat-Debon 400, they had to act quickly and develop a twin-cylinder.

The V-twin designed by Escoffier was quickly nicknamed the "Mandoline" from the perceived shape of its deep crankcase and tall magneto-drive casing. The parallel-valve cylinder-heads were recognizably closely related to those of the racing Magnat-Debons, as were the cycle components: telescopic forks, tank, and direct belt drive. A stunning 1-2 victory at the Mont Verdun hill climb in 1912, where Escoffier and KÂśhler finished first and second, was followed by numerous other victories. In 1914, the Mandoline adopted an Enfield double-chain two-speed transmission. It was a successful move: it won the Argenteuil hill climb as well as a gold medal in the Paris-Nice rally.

Enfield gearbox with separate chain for each ratio

The sole surviving 1914 KÂśhler-Escoffier Mandoline had astounding performance for its day plus a curious exhaust system with a single curved pipe linking both exhaust ports.