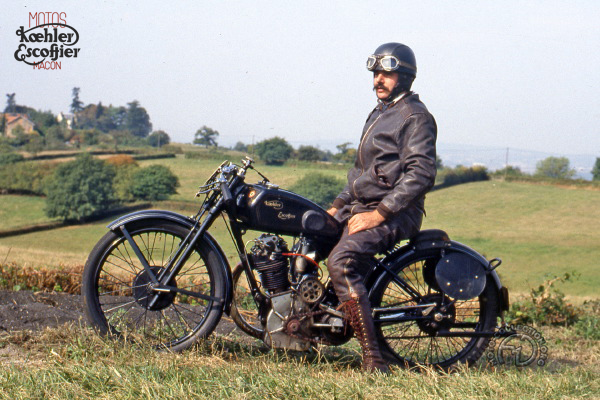 Born in 1912 from the association of a rich rider and a talented mechanic, the Lyon firm of KĀhler-Escoffier won immediate sporting glory with an ohv 500cc V-twin. The premature loss of its founders involved the marque in persistent financial problems and frequent changes of management.

In 1927, the engineer Raymond Guiguet was in sole command of KĀhler-Escoffier. He developed the V twin as far as the rigidity of the bottom end would permit: the "Sport" developed as much as 27 hp in racing tune. Guiguet then designed the overhead-cam single-cylinder K50, though it proved neither faster nor more reliable than the twin. The company's old machine tools were worn out and, lacking cash, Guiguet had to economize on the use of roller and needle bearings.

A Lucky Takeover for KĀhler-Escoffier

In 1929, the regulations for the championship of France changed: now only motorcycles of entirely French manufacture were eligible to compete. Monet-Goyon, which used English Villiers or Swiss MAG engines, solved the problem by taking over Koehler-Escoffier and consequently the services of Guiguet. With accurate machine tools and adequate finances, he developed two Grand Prix engines out of the K50. They had roller and needle bearings everywhere, special crankshafts made of the finest steels, dry-sump lubrication and a single-port head. From then on, performances were up to expectations and Marcel Chateau became champion of France for 1930 with the motorcycle shown here.

This is the actual machine which won the 1930 Championship of France: it used a rocking-pedal "Macérienne" gearbox.