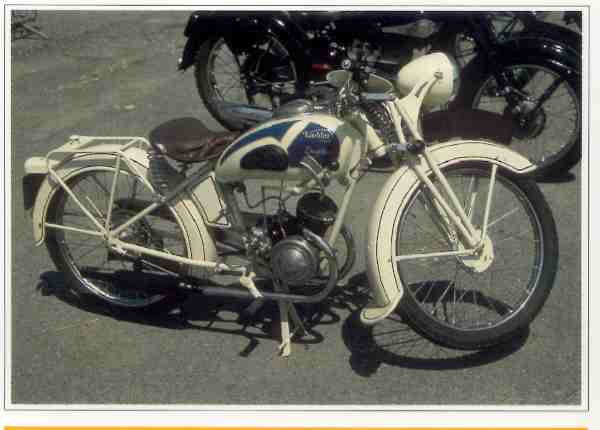 With the Terrot, Peugeot and Motobecane, the ultra-lightweight K┬£hler-Escoffier KS3G (also sold as the Monet-Goyon S3G) was one of France's best-sellers in the 1939 to 1953 period, with a number of freshening action┬¢ and transmission upgrades.

In the spring of 1936, the Macon-based company began building the new 98cc British Villiers T41 two-stroke under license. This had a flat-top piston and twin exhaust pipes.

Development of a Range

It powered the S1 (single-speed) and S2 (two-speed) ultra-lightweights, which were joined in late 1936 by the S3 (three-speed). The S3L came in 1938. It kept the three-speed box and kick-start of the S3 but was fitted with foot rests instead of the pedals, which were ill-suited to a motorcycle in miniature. Then, at the beginning of 1939 came the S3G, with a longer, lower, reinforced frame and a T41G engine ┬¢ an improved version of the T41. It was also offered as the S3GL, which was more luxurious and dripping with chrome. When he visited the factory, Marshal Petain (who headed the French puppet government under the German wartime occupation) was given a model S3G with, apparently, a working gearbox. After WWII, the K┬£hler-Escoffier S3G and S3GL became the S2GB and S3GC in 1949, with stronger transmissions (the S3GC had a Reflex foot-selector). To match the new 125 S6V, the 98cc model became the S3GD (hand-shift) or S9GDS (foot-selector) with a new fuel tank, new mudguards and new color scheme. Its career ended in 1953, when the new SAG was launched.

The KS3GD was highly popular in the post-WWII period in France, when it filled the demand for powered transport.