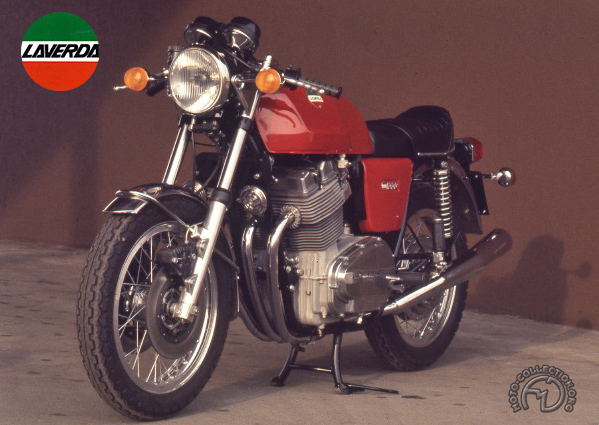 Launched in 1972, the Laverda 1000/3 (l000cc/three cylinders) was the first of a new generation of sporting big bangers; it dominated production races, particularly in Great Britain. But it was hard to make an impression on the market, faced with the Japanese giants. In France, for instance, just twenty 1000cc Laverdas were sold during 1973. The 1974 1000/3 with two disks did a little better, but the model didn't really take off until the launch of the 1975 version with triple disk brakes.

Tall in the Saddle

As its design aged, the Laverda 1000 became higher off the ground and more difficult to mount. Though its earliest versions had less performance, they were much easier to operate (though the right-hand gear selector pedal took some getting used to after the Japanese had standardized the left-foot change). With a top speed around 134 mph and a 12.1-second standing quarter mile, the Laverda was one fast bike.

A technical oddity was that the engine didn't share the 120-degree firing interval of other three cylinder units. The two outside pistons fired at 360-degree intervals and rose and fell together, while the central piston was staggered by 180 degrees. The 1000 also pioneered fully electronic ignirion.

Fully equipped, tbe Italian superbike was faster than its japanese rivas. By an ironic twist of fate, the company was later taken over by the japanese.