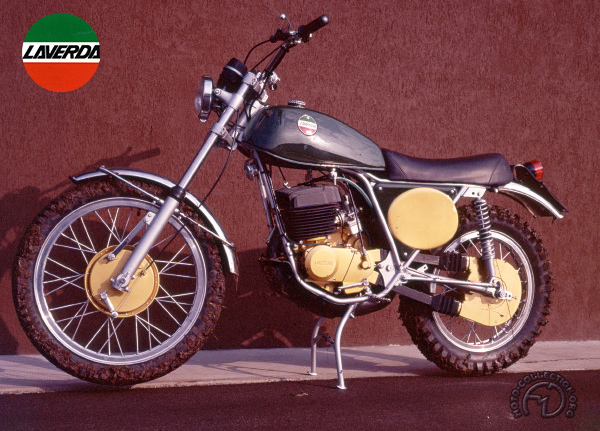 Launched at the 1973 Milan Show, the 250 Chott marked a small revolution for Laverda.

Its name, taken from a type of lake found in Tunisia, was intriguing and, moreover, if it wasn't exactly Laverda's first two-stroke (they had built a moped ten years earlier), it was the marque's initial venture into the offroad sector.

It was a "trail-bike," a class of machine that Italy had scarcely touched before, and was brimming with original ideas. Its steering head could be adjusted to three different caster angles to suit the fork geometry to different types of terrain, it had a dry clutch and the final drive was enclosed in an oil tight chaincase. Exotic materials were used in its construction, notably magnesium brakes and engine casings. Even if its styling was

unexpected, the overall effect was attractive.

However, the Chott was heavy and sadly lacking in power. Moreover, its off-road capabiblies were scarcely better than its roadholding. In 1976, Laverda tried to relaunch the Chott in a 2T/R version developing 30 hp, with a strengthened frame, a suspended mudguard ancl a more obviously "enduro" character, but the harm had already been done. When production was terminated in 1977, only some 5000 Chotts and 2T/Rs had left the factoty. Laverda was already engaged on another front with more typically "enduro" machines powered by Husqvarna engines.

In its day, the styling of the Chott was regarded as extreme, tbough nowadays it's difficult to understand what all the fuss was about!