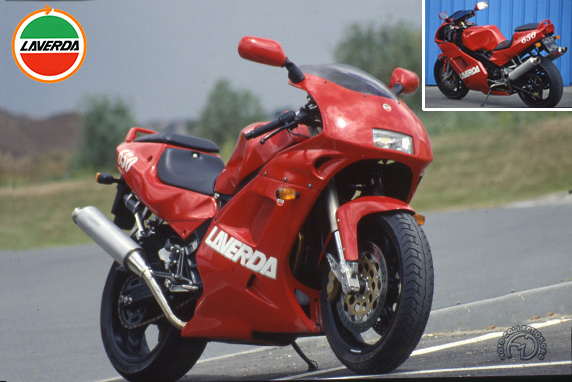 Rebirth of a legend

Launched at the Milan Show at the end of 1991, this sporty and aggressive 650 twin marks the rebirth of one of the great names of the Italian motorcycle industry.

After its great success in the 1970s with its 750 and 1000cc models, Laverda went through a particularly difficult period, marked by several attempts at a relaunch followed by costly failures. With fresh financial backing and a new factory in Bassano del Grappa - home of a fiery Italian alcoholic beverage - Laverda seems to be set for success with its new 650.

Like the Ducati - but less expensive Ā– the 650 Laverda is presented as an exclusive super sports machine incorporating all the best modern technology. The engine is already familiar because it is the ultimate evolution ve rsion of the eight-valve 500cc twin first seen in 1977. Enlarged to 668cc by increasing both bore and stroke to 78.5x69mm, this engine has been brought right up-to-date with the adoption of electronic fuel injection and air/ oil cooling using a capable radiator. In this latest form, the 650 Laverda is good for 71 hp and 137 mph. There have been major developments in frame technology, too: the new Laverda has two black-anodized tubular box-girder backbones, a upside-down telescopic front forks, single-damper rear suspension adjustable in tension and compression and oversized radial tires.

Symbolic of the revival of the Italian industry, Laverda 650 is painted Italian racing red. Its exotic look has attracted a following in japan.