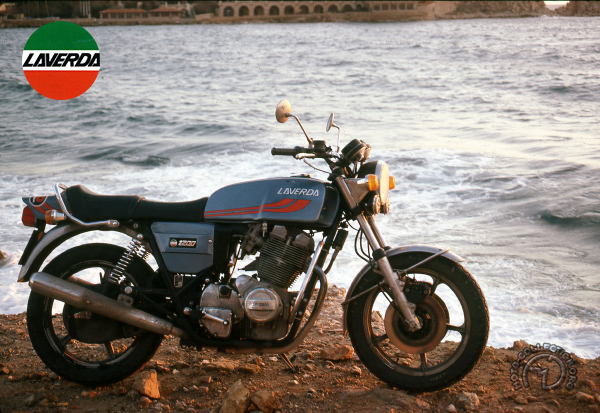 After taking the Japanese by surprise with the unveiling of its 1000 cc triple in 1972, Laverda let itself he blinded by success and developed new models whose careers were

destined to be short-lived.

To counter the new over-1000cc Japanese bikes, in 1978, Laverda hastily developed this 1200cc version of its famed 980cc threecylinder, bored our from 75 to 80mm. Apart from its cylinder dimensions, there was little to distinguish the 1200 from the 1000: more steeply raked rear dampers and an optional oil-tight secondary chaincase like the MZ, with the chain running between rubber cheeks. The motor still had the curious feature for a three-cylinder of being staggered at 180 degrees.

Though there were only detail differences, the 1200 had a different character from the 1000. lt was heavier, less lively, less sporting and had numerous faults. Even more conventional than its little sister, the 1200 failed to attract the clientele, who were more Grand Touring in nature, and who were put off by the sheer muscle needed to ride it. Though it had been very carefully designed, the "big Laverda was an obsolete concept for 1978 (suspension with minimal travel, a chain without auromatic lubrication and unequal to the torque of the 1200cc engine). However, it was expected to compete with the completely new generation of superbikes like the Yamaha XS 1100 and Honda CBX 1000 six-cylinder that benefited from competitive pricing.

Though if was extremely well-built, tbe 1200 lacked the innovatiue edge of the 1000 and failed to make an impression on its potential clientele.