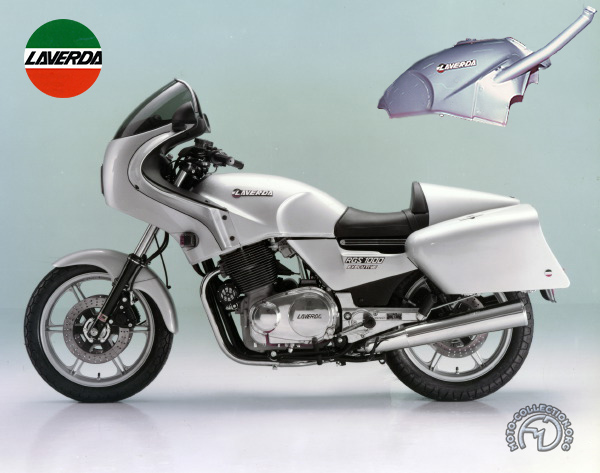 Laverda was one of the great names of 1970s motorcycling, producing a series of supremely fast three-cylinder superbikes. By the mid-1980s, the firm from Breganze in Italy was in financial trouble, but in the RGS 1000, they made one last charismatic triple.

Earlier Laverdas, such as the legendary Jota, had been the quickest on the road. in their day, but lack of money for development meant the Breganze bikes lost their performance edge. Later models became more refined - but the RGS was still a big, fast motorbike, with the looks and appeal of a true Italian thoroughbred.

Its motor was a tuned version of Laverda's long-established air-cooled triple, complete with most of the power that had been lost over the years clue to tightening emission controls. The 981cc unit produced around 90 hp with a smoothness and civility that its

forebears could not match, and sent the RGS storming to 140 mph. Laverda triples had always been tall machines, and the RGS was no exception. Its chassis was old-fashioned, with firm suspension, twin rear shocks and unfashionably large 18 inch wheels. Stability

was good, but low-speed maneuverability less so, making the RGS more of a grand tourer than a sportster. Its generous fairing, long-legged feel and general high quality were well suited to the role. But sadly, Laverda's worsening financial problems meant that few RGS 1000s were built before production at Breganze ground to a halt.

Destined to be the last in the famous line of charismatic Laverda superbikes, the RGS 1000 is styled to leave its trademark three-cylinder engine on display.