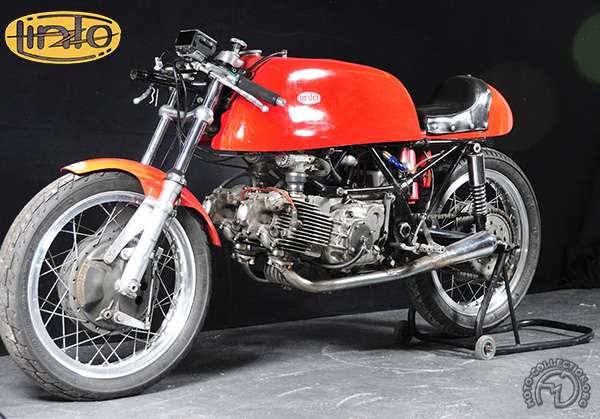 The link between the English and the Japanese

Lino Tonti was one of the most famous and most prolific of postwar Italian technicians. After starting his career brilliantly with Mondial and Bianchi, in the mid-1960s Tonti attempted to remedy the lack of 500cc machines available to private riders. He undertook the design and construction of a "production racer" which bore the name he had coined for his first twin-overheadcamshaft 75cc in 1949: "Linto."

At the same period, his colleague Giuseppe Pattoni had the same idea and launched his famous Paton machines. While the Paton was based on Mondial components, the 500 Linto was a crude concoction built around two coupled 250 Aermacchi engines. Revealed at the end of 1967, the Linto was prepared by Alberto Pagani, and a second place in the 1968 East German GP attracted a number of orders for the 1969 season.

At the start of 1969, Tonti left to design the V7 Guzzi. The reliability of the rapid Linto remained dubious and the clients, badly let down and financially bruised, drifted back to their English machines. But the Marszowsky succeeded in becoming vice-champion of the world behind the uncatchable MV, while Pagani managed to win a Grand Prix. A total of some 20 Lintos were assembled before the launch of the Kawasaki H1R "client-racer" in 1970 sidelined this fast but troublesome machine that had never managed to overcome its growing pains.

The Linto was intended to fill the ranks of machines in pursuit of the inaccessible MV of Agostini, but its fragility ruled otherwise.