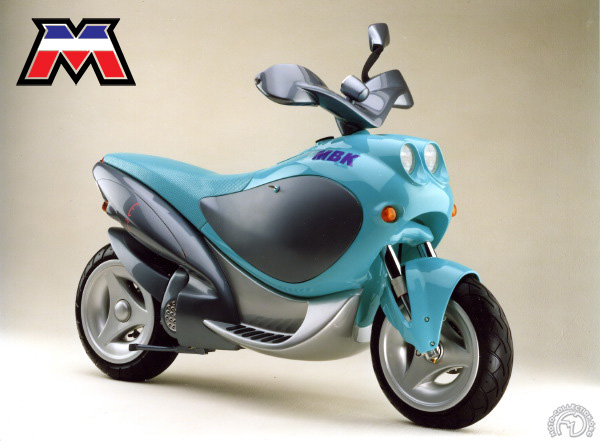 A glimpse of the future

"I wish no harm to your planet; I only want to give you a glimpse of the future." That was how the MBK team launched the European Transporter, known as the "ET" in homage to Steven Spielberg's immortal film. Star of the November 1991 Paris Salon, the ET was one of only a handful of "dream bikes" at the salon, much to the disappointment of the visitors, who had hoped to see the concept machines that had starred at the Tokyo Exhibition.

This oddly attractive little vehicle, designed by Sacha Lakic for MBK, shows what tomorrow's urban two-wheelers will probably look like. Increasing traffic congestion will inevitably result in an increase in the popularity of scooters and similar two-wheelers, which should be practical and useful, but fashionable in concept as well.

Back to the Future

Futuristic, yet with a hint of nostalgia, ET is not really a true scooter since its rider sits astride it like a motorcycle rather than with his legs behind a dashboard. It redefines the concept of the small urban two-wheeler, which has been cast in a dismally utilitarian role in recent years. Nothing has been omitted; the practical ET has a little toolbox on the left and a larger cubbyhole for two helmets on the right. A third little compartment holds a Walkman which can be plugged straight into the integral loudspeakers. ET's front and rear brakes are interlinked, it has a catalyst on its exhaust, and it is made of impact-absorbent plastic that can be recycled. It even has heated handlebar grips and gullwing shields for the rider's hands.

MBK (alias Motobécane), a European subsidiary of Yamaha, is closing down its independent design studio which gave us this novel vision of the future.