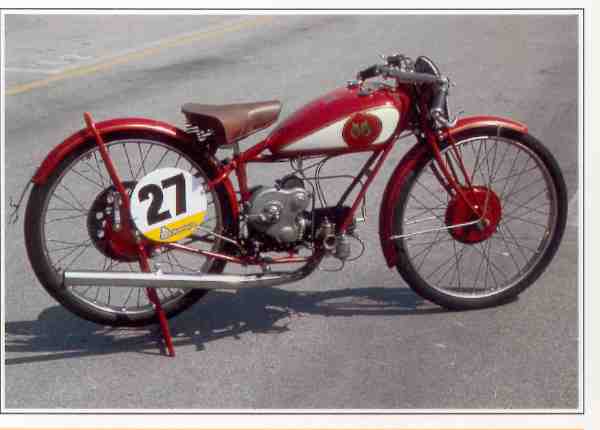 The end of a trend

In 1924, two young men, Mario Mazzetti (who had come from GD) and Alfredo Morini (who would later on found his own marque), met Giuseppe Massi-Mazzi and Angelo Mattei in Bologna. Inevitably, perhaps, the make of motorcycle that resulted from their meeting was called "MM," for there was not a shortage of that letter in their initials. Nor was the company name thrown out of kilter by the retirement of Massi-Mazzi and Mattei in 1927.

The first machine launched by MM was closely related to the GD for which Mazzetti had been partially responsible a little while earlier. Its layout, with a horizontal two stroke single-cylinder engine, was one that was universally popular among makers of lightweights in the 1920s and was used - among others - by Evans in the US and Cockerell in Germany.

MM followed this trend for a relatively long time. Riding an MM 125, Tigli was Italian Champion in 1926-27, and Mariani succeeded him in 1928, again on an MM 125. Shown here is a later 175cc version whose sport record was relatively meager; even adding a piston-type supercharger failed to improve its performance sufficiently. The return to sport success for MM only came when it switched to four-stroke engines. After Morini left the company in 1937 after falling out with its new owners, his influence on MM design rapidly faded; Allied bombing of the works in 1943 didn't help, either. The company was finally closed in 1958, having made 8030 bikes.

The little horizontal (wo-stroke single was a popular design in the 1920s, but was becoming outmoded by 1930 when this little 175cc single was built.