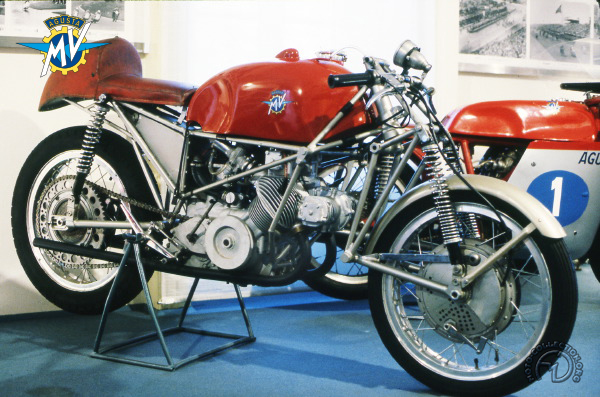 Though the .MV Agusta marque - 37 times world champion - is justly famed for its four- and six-cylinder 350 and 500 Grand Prix racers and its 125 and 175 singles, Count Agusta's firm nevertheless tried its hand with other configurations, like this unorthodox

wasn't until 1958 that John Surtees brought the marque its first 350cc world championship. In the meantime, the factory had developed several possible alternatives, like this highly original twin with its trellis frame drawing on techniques used in aeronautics and Formula 1 race car chassis. This extremely light and rigid triangulated

structure was constructed from small section tubes. Easily dismounted, the suspended engine contributed to the rigidity, while the Earles front fork employed a similar construction technique to the frame.

As for the engine, it was derived from a touring 300cc unit designed by the engineer

Giannini in 1955, which developed 20 hp at 8,000 rpm but which had never passed the prototype stage. Considerably lightened, the 350cc racing version was distinguished by its twin external-inertia flywheels. It was a layout that allowed an excessively compact engine; its inclined cylinders were topped by cylinder heads with ample radial cooling fins.

MV Agusta eventually preferred the power of a four-cylinder engine to the maneuverability of this masterful twin.