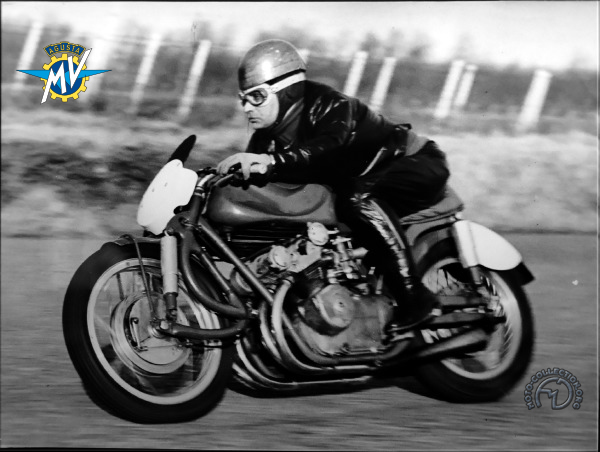 In 1950, the famed engineer Pietro Remor, designer of the all-conquering Gilera Grand Prix racers, was employed by Count Agusta to create a rival for his Gilera.

Logically, the engine of the first MV of 1950 resembled that of the Gilera. In other respects the new MV offered original and unorthodox solutions not normally seen in racing: final drive by shaft, double selector speed change and front and rear suspension by parallel arms and torsion bars. The machine made its first appearance at the Belgian GP, where it finished fifth, ridden by Artesiani; three Gileras were ahead of it.

The MV was certainly fast, but its road-holding was marginal. Its front fork was changed for a telescopic fork in 1951, then for a heavy rigid Earles fork the following season. That 1952-53 version also replaced the friction dampers on the rear suspension with classic spring-damper units. It retained the parallel arms, a heavy and clumsy set-up that did eliminate suspension lock-ups caused by the shaft final drive during heavy acceleration. The same principal, baptized "Paralever," was re-invented by BMW in 1987. The ultimate shaft-drive MVs disappeared unsung in 1953. The previous year MV had brought out the classic 500/4 with chain final drive and conventional suspension: MV went on to win eleven world championships.

The shaft-drive MVs were a bold experiment, but too complex to achieve success.