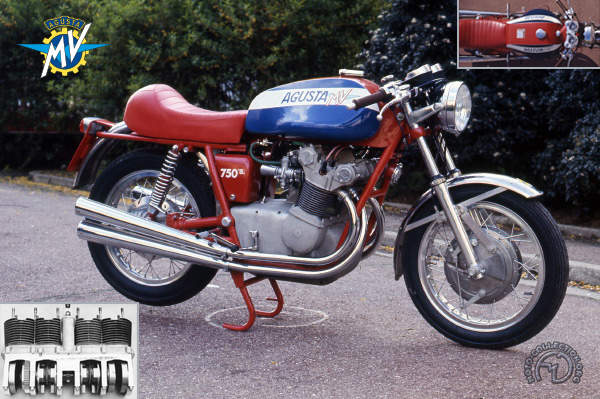 The Ferrari on two-wheels

"Founded in 1945 more as a hobby than as a commercial enterprise, the Meccanica Verghera company, run by Count Domenico Agusta, was to Italian motorcycles what Ferrari is to cars. Between 1952 and 1973, MV gained the unequalled record of 37 world championship titles.

From the start, Count Agusta's ambition was to follow in the tracks of Bianchi, GD and Gilera, who had already made their names with transverse four- cylinder models. The first MV four, a shaft-driven 500 cc, appeared in both touring and racing forms in 1950.

Riders like Les Graham, Luigi Taveri, and John Surtees brought the marque its racing successes, but the Count would not let his vision of a road-going four drop. His Grand Touring four appeared in 1966, more than two years ahead of the first four-cylinder Honda; it was powered by an advanced 600 cc derived from the shaft-driven 500 cc MV four. Overpriced and not sporty enough, the 600 was a total failure. Undeterred, MV tried again with the 1969 750 cc Sport, which remained in the firm's catalog until its demise in 1980. Too costly, too tame, and too fragile, the shaft-driven MV belonged to an earlier age - it had little in common with the successful racing MVs. But it had plenty of style - and that makes it highly sought after by modern collectors.

The 1973 version of the MV four was the last to have a front drum brake; later models, like the 750S America, had twin discs.Â”