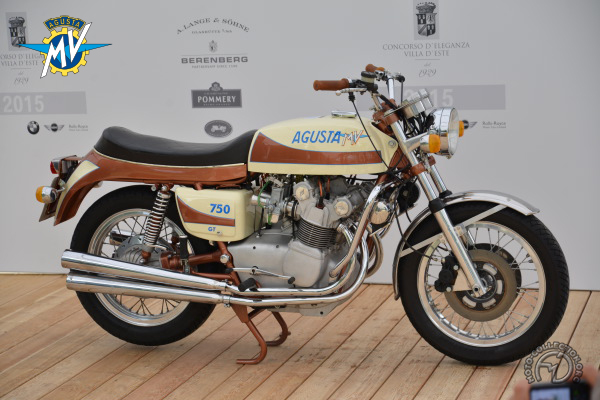 The marketers of the different versions of the MV Agusta 750 four-cylinder never claimed the most efficient or highest performing machines on the market. But from the outset they basked in the extraordinary aura of a marque that took 37 World Championships between 1952 and 1974, as well as 38 titles taken by individual riders.

It would be unfair to judge these MVs by the same standards as normal bikes. Like certain prestige automobiles, the MV Four is above all a fine piece of machinery. It is a limited edition work of art; it does not gain its value from its inherent performance, but from the way it captures the spirit of an age. Its character, its bewitching sound Â– even its faults Â– confer its unique attraction.

MV built its first four Â– a touring 600 Â– in 1965, but without much success. It was replaced in 1969 by the 750 Sport, but in 1971 Count Agusta returned to his original concept of conquering the American market. This superb GT's equipment Â– especially its white and bronze color scheme Â– was a deliberate break from the traditional sports bike. It was the most successful of all the MV Fours, with sporty performance and character. MV Agusta suspended production in 1977, but owners of the Cagiva group, bought the marque name with the aim of resuming production by selling replicas of the firm's most famous racing machines to an appreciative public.

MV Agusta built less than 50 examples of the 750 GT; the last few were fitted with front disc brakes.