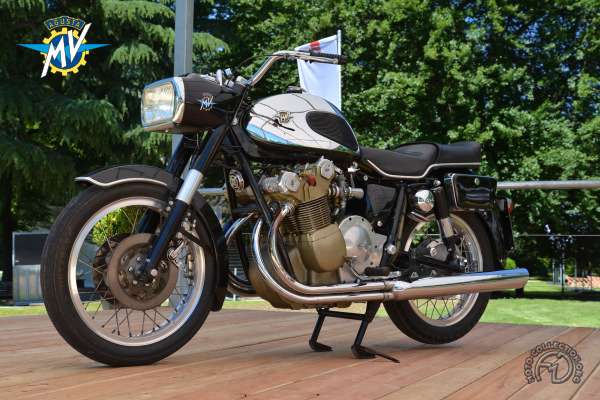 The first road-going MV Agusta four was unveiled in 1950, causing a sensation, but it never passed the prototype stage. However, MV Agusta was farsighted and took up the challenge 15 years later with this 600. Its technical specifications were exemplary: twin

However, that wasn't enough to assure the commercial success of the MV 600, because it simply cost too much. Its image as a sensible touring bike cut no ice with a generation that dreamed of sports bikes and whose idols - Surtees, Hailwood and Agostini - dominated the Grand Prix on their MV Agustas. Neither the sales network of the marque nor its production capacity could support a sufficiently large output to make the 600 a worthwhile proposition.

Magic of a Name

Sadly for Agusta, 14 years later, Soichiro Honda was to make his fortune with the same idea and a less prestigious but simpler and more reliable four-cylinder bike boosted by a more effective marketing campaign. The MV 600, conceived as a touring bike, was inspired by the firm's original racers but had little in common with the racers of 1965. MV attempted to atone for its error by increasing the displacement to its four-cyinders to 800cc and adopting more sporty lines and colors but, handicapped by the obsolete basic design, the MV Four had little more than the magic of its name.