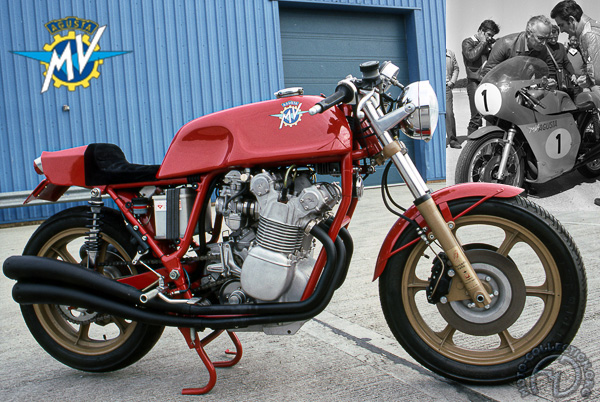 This sporty machine, developed by the former technical head of lhe MV Agusta racing team, was based on the 750 Imola ridden by Giacomo Agostini in the 200 Miles of Imola in 1972. Originally, Count Domenico Agusta wanted to participate regularly in Formula 750 events in Europe and the US to promote his new 750 Sport model.

Unfortunately, during the 200 Miles the MV broke down while Agostini was third, and was never seen on the racetrack again. The MV team devoted itself more fully to the 500cc Grand Prix scene, where the Yamahas were an increasing menace.

Arturo Magni took over the project at his own expense, and marketed this type of machine under his own name. The main difference between the 750 S and the Imola racing version was the final drive by chain instead of shaft. The engine, with twin overhead camshafts driven by a train of gears, was only mildly modified. The 750 S Magni Special nevertheless adopted racing cam profiles and a closer-ratio gearbox, made specially to complement the change of final drive. This machine was obviously highly reminiscent of the ultimate MV Agusta four-cylinder Grand Prix racers, though it could scarcely conceal the fact of its road-going roots, for the touring MVs were less sophisticated than the racing bikes. Designed around an older mechanical base, it lacked the finesse that the engineers had instilled into their Grand Prix machines.

A classic motorcycle prized today by collectors. The "Magni Special" symbolizes everytbing that is best about tbe legend of the MV Agusta.